Opportunities
For Students
For Faculty and Staff
For Community
For Alumni
Courses
Our Network
About
About David M. Einhorn
Our Team
Stories and News
Engaged College Initiative
Calendar
Our Supporters
Make a Gift
Contact
Artist explores cultural identity by deconstructing materials
By Galib Braschler 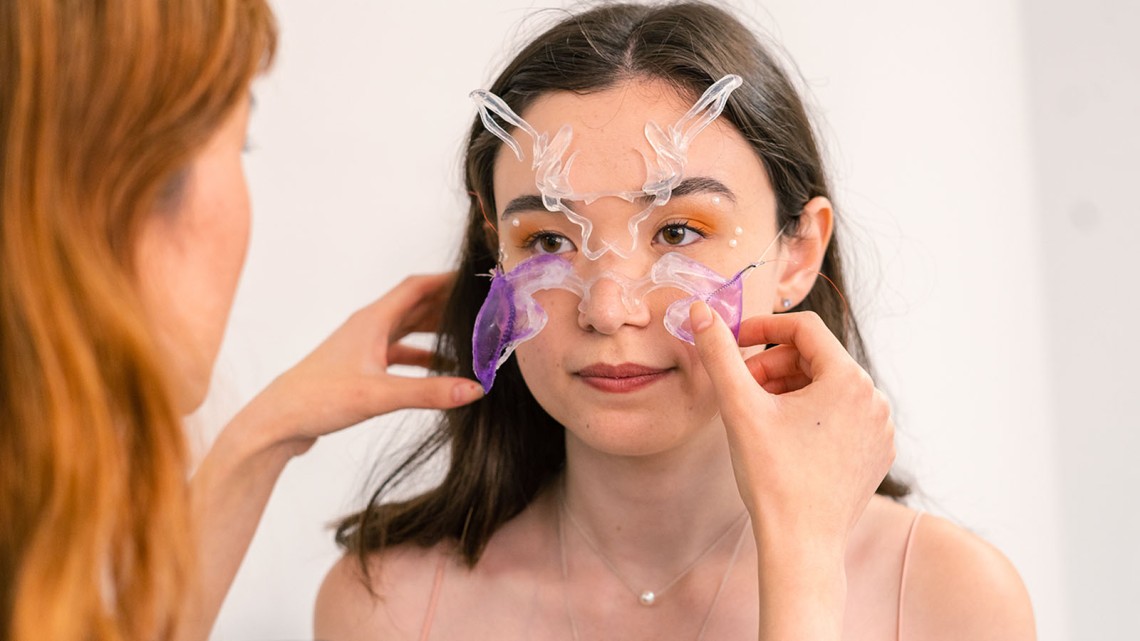 Morgan Chen (left) and Anna Paaske '24, who is modeling a piece Chen created during her residency

There’s something living under the bed in Morgan Chen’s Brooklyn apartment. She’s contained it in a storage bin, but it’s constantly growing, changing shape and texture. Eventually it begins to mold. And it resembles human flesh.

It’s neither a monster nor a shape-shifting beast. And it’s not scary; it’s SCOBY. The byproduct of fermenting tea, like the process that yields kombucha, SCOBY, which stands for symbiotic culture of bacteria and yeast, takes only days to produce a biofilm called bacterial cellulose. Drying the material significantly shrinks its thickness. It encases or fuses with other objects, and it can be dehydrated and rehydrated.

For multidisciplinary artist Chen, growing SCOBY in her apartment and deconstructing the material into different states has fueled her curiosity to integrate her art practice with emerging tech. From early June through mid-August, she has spent six weeks at Cornell’s Hybrid Body Lab as the inaugural artist-in-residence, working with the latest interactive on-body technologies the lab is exploring while also collaborating with researchers to explore disciplines including on-skin fashion, tattoo art and makeup.

Chen’s  residency was funded by the National Science Foundation and a College of Human Ecology Engaged Research Grant made possible by the Einhorn Center for Community Engagement. The goal of the residency, set to run through the next five years, is to shed light on interdisciplinary processes for collaboration between STEM and the arts in designing future on-skin interfaces.

Read the full story on the College of Human Ecology website.