Opportunities
For Students
For Faculty and Staff
For Community
For Alumni
Courses
Our Network
About
About David M. Einhorn
Our Team
Stories and News
What is Community-Engaged Learning?
Engaged College Initiative
Calendar
Our Supporters
Make a Gift
Contact
Bruce Levitt awarded inaugural Engaged Scholar Prize
By Dan Aloi 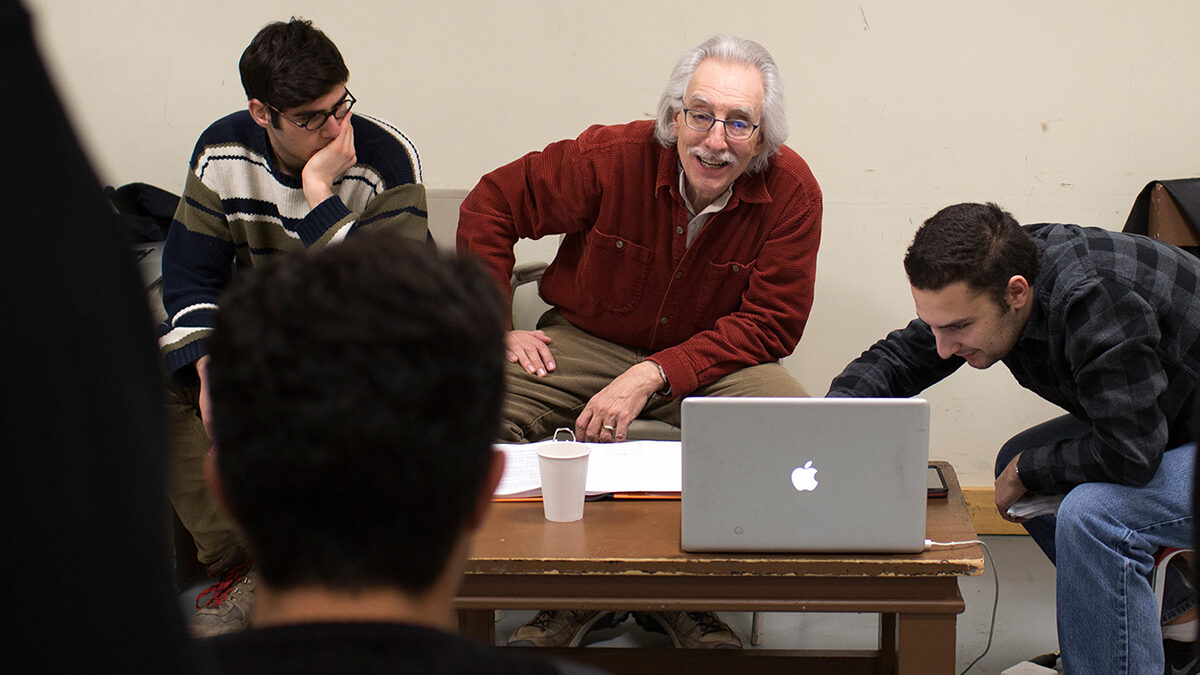 Bruce Levitt, professor of performing and media arts (PMA) works with students during a rehearsal for a play in Auburn, NY related to the Cornell Prison Education Program (CPEP).

Administered by Engaged Cornell, the annual prize recognizes a faculty member who inspires others with innovative integration of teaching, learning and research involving public or community-based partnerships. Levitt was nominated for the prize by the Department of Performing and Media Arts (PMA).

In his teaching, Levitt has developed classes around community-based theater as a catalyst for social change, exposing his students “to the integral relationship of theater to its cultural context, helping them to grow through enhanced understanding of civic engagement and social action,” PMA department chair Nick Salvato said in his nomination letter.

Since 2011, Levitt has been the lead facilitator for the Phoenix Players Theatre Group (PPTG) at Auburn Correctional Facility, a program initiated by inmates in 2009 with assistance from Stephen Cole, the late professor emeritus of theater arts.

In the process of performance practice and approaching the work as a discipline, the incarcerated men achieve transformation, empowerment and even redemption, Levitt said. PPTG gives them an opportunity to share their stories and experiences and “to be witnessed; to alter the stereotypes about incarcerated people and to reveal themselves as unique and multifaceted individuals who transcend the labels that define them within the greater society,” he said.

In her recommendation letter, Gretchen Ritter, the Harold Tanner Dean of Arts and Sciences, wrote: “Bruce is a mentor and guide, helping the inmates in their work but rightly leaving its formal leadership to them. That approach is empowering, but even more empowering (as the men attest) is the healing, humanity, openness to vulnerability, and love that are at the center of the theater work.”

Inmate Adam Roberts wrote: “After 16 years in prison, I have learned that volunteer programs like PPTG do more to rehabilitate participants than all the state-mandated programs combined. We could not continue to exist without the dedication and enthusiasm of Professor Levitt.”

PPTG co-founder Michael Rhynes was transferred to Attica Correctional Facility, where he “has succeeded in obtaining permission to start a theater group,” Levitt said.

Rhynes wrote: “When Bruce arrived in our midst, we were a ragtag bunch who barely believed in our individual selves. … I never envisioned PPTG being about creating actors. It was brought into existence to reconnect us to our humanity.”

A number of former and current Cornell undergraduate and graduate students have assisted PPTG as co-facilitators. Jeremy Flynn ’11, who worked alongside Levitt at Auburn, described him as “a model of persistence, and world class at what he does. … To say he is only an inspiration is an understatement – he is actively changing the world for the better.”

In “Human Again,” presented in April at the Auburn Public Theatre, students performed first-person narratives written by the inmates. The Phoenix Players have developed and performed three other productions inside prison walls since 2011: “Inside/Out,” “Maximum Will” (based on Shakespeare) and “An Indeterminate Life.”

“What they write is extraordinarily moving and powerful – and sometimes, hilariously funny,” Levitt said.

He is preparing a documentary about the group and theater as a transformational force, filmed with student participation at the Auburn prison, with permission from the New York State Department of Corrections and Community Services.

Levitt also has developed a new community-engaged Cornell course offering for 2017, Prison Theatre and the Possibilities of Transformation, that will help fulfill an undergraduate requirement in a new Crime, Prisons, Education and Justice minor.

As the 2016 Engaged Scholar, Levitt will receive $30,000 to expand and deepen his community-engaged work and provide support for work by community partners and students as essential contributors. The prize will support a public presentation in the fall, and Levitt says it will also help him to complete the documentary for distribution.

After arriving at Cornell from Columbia University in 1986, Levitt oversaw an initiative using interactive performance by student and professional actors to address campus and student issues. Now called the Cornell Interactive Theatre Ensemble, the group has developed programs on issues in the workplace, the classroom and public institutions, and training modules for major corporations and New York state social workers.

Levitt chaired the Department of Theatre, Film and Dance (now PMA) from 1986 to 1995. He produced “An American Festival” for the Schwartz Center for the Performing Arts’ opening in 1988, and over his career he has directed more than 60 plays, 21 at Cornell.

The recipient of five Faculty Fellow in Service grants from Cornell, he also serves on the board of the Cornell Prison Education Program (unaffiliated with the Phoenix Players).

“Professor Levitt’s 30 years’ commitment to community-based arts as a researcher, a teacher, an artist and a mentor has engaged not only Cornell and the Ithaca communities, but also the [region] and beyond in issues of national concern through socially focused creative endeavors,” Salvato said.