Opportunities
For Students
For Faculty and Staff
For Community
For Alumni
Courses
Our Network
About
About David M. Einhorn
Our Team
Stories and News
What is Community-Engaged Learning?
Engaged College Initiative
Calendar
Our Supporters
Make a Gift
Contact
Cornell, Boynton students find common ground through writing
By Kathy Hovis 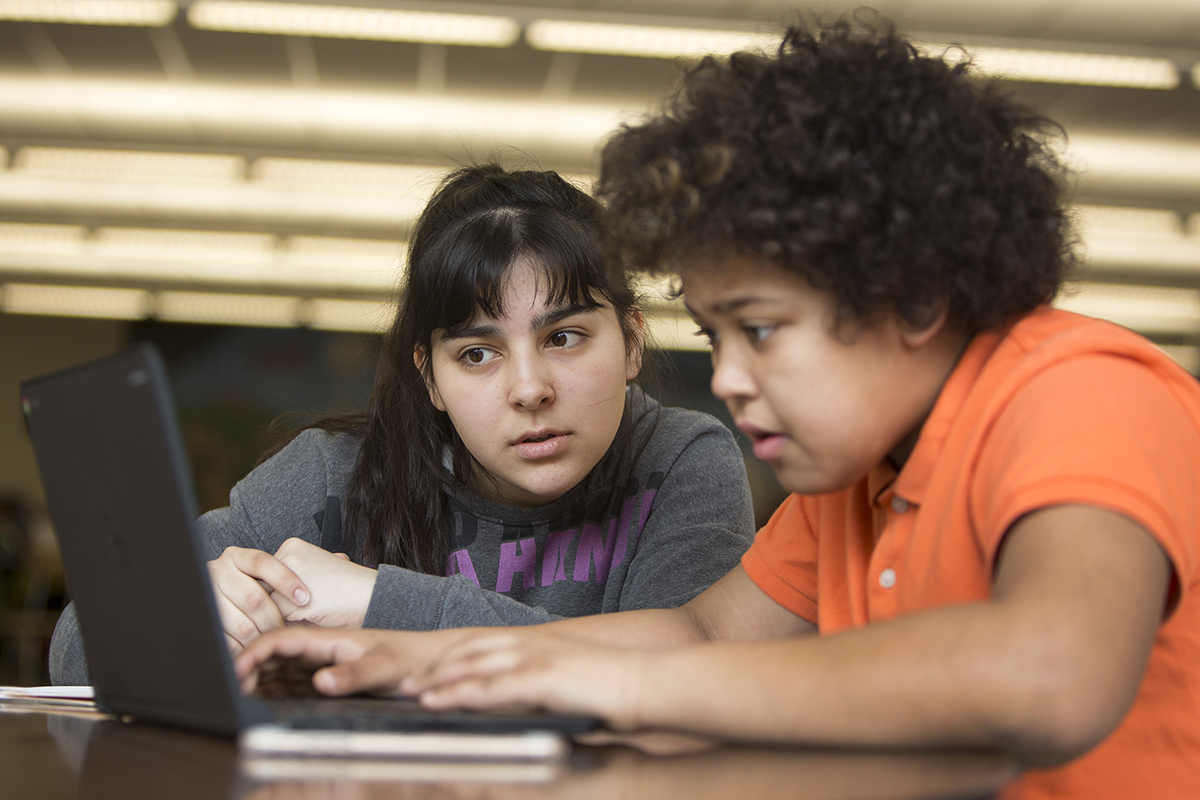 At Boynton Middle School on a recent Thursday, a few kids are shooting hoops on basketball courts outside the cafeteria, but sixth-grader Ja-kai Correio is inside, focused on his computer.

“For English, I had to make up my own God, like the ones in Percy Jackson, and now I need to write five paragraphs about what he can do,” Correio said as he types away, all under the watchful eye of Rebecca Burd ’20, a student in the Common Ground freshman writing seminar at Cornell taught by Darlene Evans, senior lecturer and director of writing outreach for the John S. Knight Institute for Writing in the Disciplines.

Every Tuesday and Thursday this spring, students in Evans’ seminar meet for class, where they read and write about various texts related to education, including “School: The Story of American Public Education,” “The Death and Life of the Great American School System: How Testing and Choice Are Undermining Education” and “Education Is Politics.” Then they climb into a van to head to Boynton, where they work with their middle school partners on writing and reading skills.

“During class time, we’re studying the issues affecting schools, and then meeting the students where they are,” Evans said of the idea to combine the class with an outreach component. “We’re observing how students learn, what the school system is like and what the relationship is between students and teachers.”

Evans has been partnering with local schools as part of her writing seminars since 2003. This is her third year working with students at Boynton.

Annissa Harden, an eighth-grader who took part in the program last year, said her Cornell partners have done more than just help her with homework.

“She tells me about what goes on at Cornell in case I want to go there someday,” Harden said of Cathy Xie ‘20. “And she gives me good advice about keeping focused and on track and not worrying about what others think, but just worrying about myself.”

Xie said the writing seminar is her favorite class so far at Cornell. “I know I want to work on education policy in some way,” she said.

Kelly Song ’20 was attracted to the seminar because of her passion for working with schools and kids. She already has a nonprofit, Brick by Brick Foundation, which donates the money it makes from beverage sales to help support music programs at underfunded schools.

“At Cornell we’re surrounded by high-thinking professionals, and we don’t always see the community around us or that there’s a gap between where we are and where other people are,” Song said.

The Cornell-Boynton pairs begin the semester by getting to know each other through icebreakers and sharing their personal stories. Then they work together on homework and tutoring projects and finally create a joint presentation, which they will share during their final meeting of the semester at Cornell.

The program has had a lasting impact on some Cornell students, including Erin Grohe ’19, who took the freshmen writing seminar last year but continues to volunteer at Boynton this year.

“I didn’t want the students to think we were going just because it was class and we got credit for it,” Grohe said of her continuing work there. “I wanted them to know we cared about them.”

Grohe said the Boynton experience enriched her understanding of the topics she was reading and writing about in the class.

“We read lots of information about the pressures of standardized testing and then talked to Boynton students, some of whom were opting out of testing,” she said. “That made it very easy to draw parallels between what we were reading and what we were seeing at Boynton.”

Grohe, a human development major, said the long-term experience has allowed her to form bonds of trust with the middle-schoolers.

“I’m there more in the capacity of a friend and mentor rather than a tutor sometimes,” she said. “And sometimes I’m just helping them to stay focused and help them find the motivation when they think they don’t have the capacity to do what they’re being asked to do.”