Opportunities
For Students
For Faculty and Staff
For Community
For Alumni
Courses
Our Network
About
About David M. Einhorn
Our Team
Stories and News
What is Community-Engaged Learning?
Engaged College Initiative
Calendar
Our Supporters
Make a Gift
Contact
Engineer Max Zhang awarded Engaged Scholar Prize
By Tom Fleischman 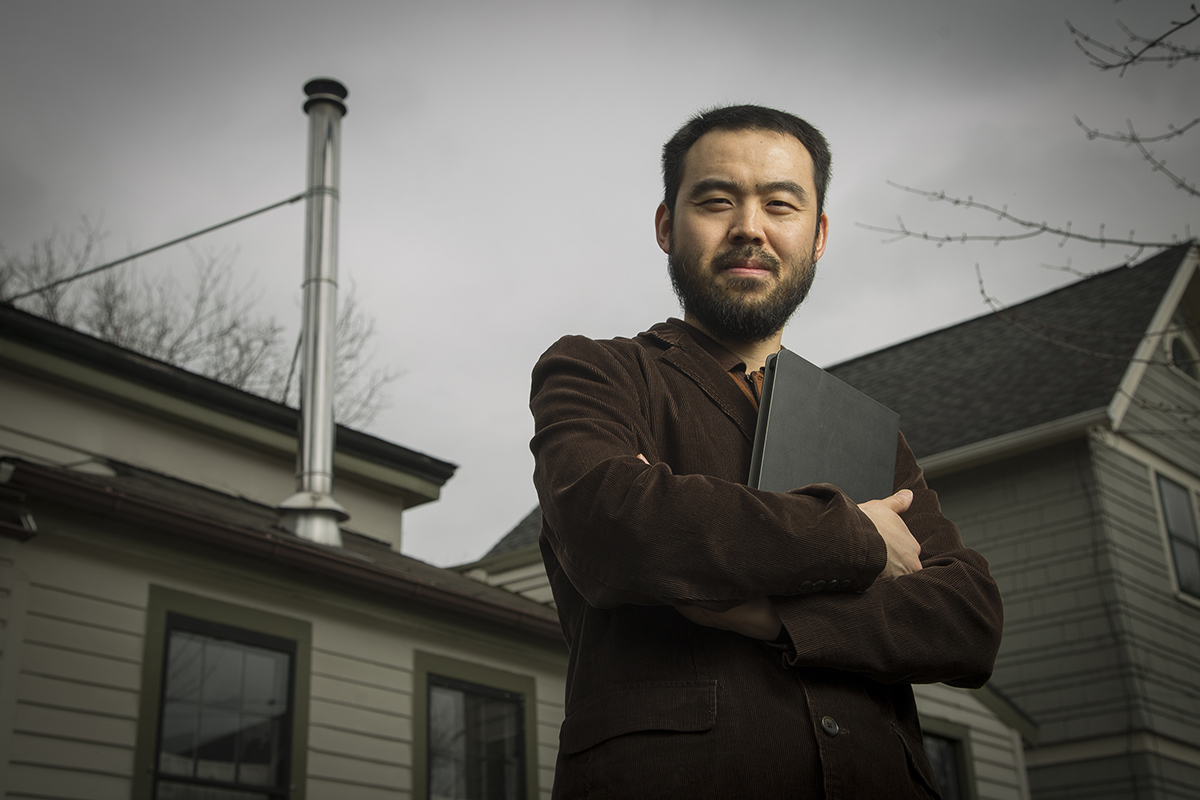 Max Zhang in Ithaca with home that uses wood as a heat source.

Max Zhang, associate professor of mechanical and aerospace engineering, who has devoted his career to the development of sustainable communities, is the recipient of Cornell’s second annual Engaged Scholar Prize, Vice Provost Judith Appleton announced April 6.

Administered by the Office of Engagement Initiatives in support of Engaged Cornell, the annual award recognizes a faculty member who inspires others with innovative integration of teaching, learning and research involving public or community-based partnerships. The award review committee comprises undergraduates, graduate students and faculty.

Zhang was nominated for the prize by colleagues and leadership in the College of Engineering.

“I really believe that there is a synergy between community engagement and research,” said Zhang, who directs the Energy and the Environment Research Laboratory (EERL) and is a fellow at the Atkinson Center for a Sustainable Future. His current research is supported by agencies such as the New York State Energy Research and Development Authority (NYSERDA) and the National Science Foundation.

“Engaging communities and addressing real-world problems has motivated me to conduct research that has societal impact,” he said in his application letter for the prize. “Learning from and working with communities has inspired me to pursue new research ideas and new pedagogical methodologies to educate future leaders.”

Zhang earned his doctorate in mechanical engineering from the University of California, Davis, in 2004, and was a research scientist at the Air Quality Research Center at Davis before joining the Cornell faculty in 2006.

His work on improving communities’ sustainability began with his doctoral research on near-road air pollution, which contributed to a California state law that prohibits siting new schools near freeways. His recent work on air pollution mitigation has contributed to a pair of EPA reports, on roadside vegetation and on reducing near-road pollution at schools.

Zhang teaches classes at Cornell’s Sibley School of Mechanical and Aerospace Engineering in engineering thermodynamics, future energy systems and air quality. He values experiential learning, for himself and his students, which has motivated his seeking community-based projects involving sustainable energy systems.

Zhang has studied sustainability issues in several communities across the country, and recently worked with the Tompkins County Planning Department to develop an energy roadmap for the county. The latter involved evaluating local energy efficiency and resources (including solar, wind, biomass, micro-hydro and enhanced geothermal) and developing scenarios to meet the county’s 80 percent greenhouse gas emission reduction goal, as well as projected energy needs, through 2050.

Additionally, one of his NYSERDA-funded projects is to identify excessive residential wood smoke in Ithaca. Zhang worked with one City of Ithaca resident to reduce the smoke emanating from the chimney, in response to neighbors’ complaints.

Lance Collins, the Joseph Silbert Dean of Engineering, was one of eight people from the engineering college and the community who wrote letters in support of Zhang.

“I am glad to see that Max’s community engagement efforts have strengthened a thriving town-gown relationship between Cornell and Tompkins County,” Collins wrote. “With a myriad of local initiatives and a large number of active community organizations, Tompkins County has become a living laboratory for Cornell students. I have no doubt that Max will deepen his collaborations with community partners.”

In their joint nomination letter, mentors Zellman Warhaft, professor emeritus of mechanical and aerospace engineering, and Tim Mount, professor emeritus in the Dyson School of Applied Economics and Management, called Zhang “an exceptional example” of the type of educator the Engaged Scholar Prize recognizes.

“He has established a well-funded research program (EERL) bringing science-driven solutions to address challenges that communities are facing,” Warhaft and Mount wrote in their letter. “He has introduced real-world, community projects to his teaching and mentoring of undergraduate and graduate students, and motivated them to pursue careers in sustainable development.”

County legislator Martha Robertson, chair of the Planning, Development and Environmental Quality Committee, wrote that the county “absolutely could not have created the roadmap without Max’s expertise and dedication to the project.”

The Engaged Scholar Prize includes $30,000 to expand and deepen community-engaged activities. Zhang plans to use the award to support undergraduates’ travel to present at professional conferences, and for continuing his work on an environmental monitoring network in Ithaca.

This story was published in the Cornell Chronicle.