Opportunities
For Students
For Faculty and Staff
For Community
For Alumni
Courses
Our Network
About
About David M. Einhorn
Our Team
Stories and News
What is Community-Engaged Learning?
Engaged College Initiative
Calendar
Our Supporters
Make a Gift
Contact
John F. Kennedy Award recipient reimagines public safety
By E.C. Barrett 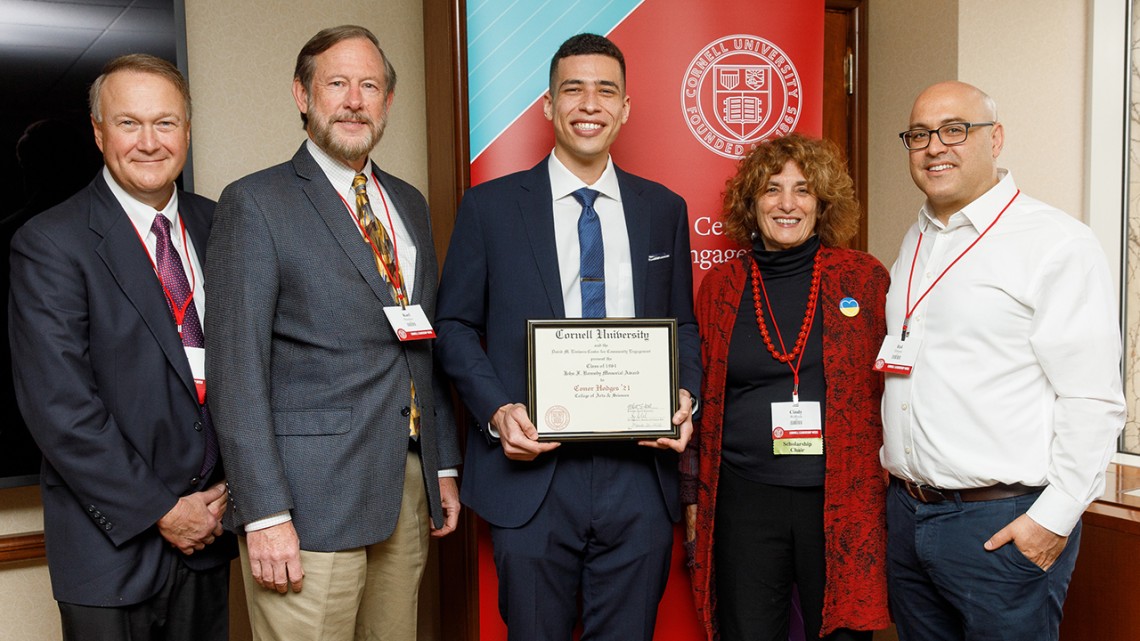 Growing up in a multiracial family in a highly-policed community, Conor Hodges ’21, the 2022 recipient of the Class of 1964 John F. Kennedy Memorial Award, has first-hand experience of the ways in which militarized police forces across the United States are used against low-income communities and people of color.

“To my family and neighbors, our nation didn’t seem interested in improving our lives,” Hodges said. “Instead, it seemed interested in surveilling us, arresting us and ensuring we didn’t cross the boundaries that separated us from the wealthier zip codes that surrounded us.”

An Army combat medic veteran from a justice-involved family, Hodges, who is Black, has dedicated his academic study, campus leadership and social justice advocacy to understanding and offering alternatives to the current model of policing. The JFK Award, administered by Cornell’s David M. Einhorn Center for Community Engagement, honors his work at Cornell and provides $15,000 to support his further education.

“One out of every 291 police responses end in unnecessary injury or death,” Hodges said. “My personal mission is to convince Americans that safety and justice are possible without solely relying on armed responders, that we might spare the 1,000 killed, 2,500 hospitalized and 50,000 injured every year by the United States’ police-centric public health and safety system.”

Hodges co-authored PSAC’s report, outlining an emergency response model for the university that would reserve law enforcement deployment for those situations in which it is unambiguously needed. He then led a successful campaign to create a working group dedicated to launching an alternative response model by 2023.

“There are plenty of examples of communities, especially Indigenous communities, which exercise a police power without using violence or the threat of violence. I’m hopeful that programs like the one Cornell is starting and programs like some other cities have already piloted will help us build towards a non-carceral, anti-violent future,” Hodges said.

In her recommendation letter for the JFK Award, Cornell Executive Vice President and CFO Joanne DeStefano, who worked closely with Hodges as he served on PSAC, wrote: “Conor has been a tremendous resource in Cornell’s antiracist and public safety reform initiatives, and I am certain that he will continue to be a thought leader in whatever field he chooses following his time at Cornell. He will be an extraordinary representative of the university and clearly carries the fire of ‘idealism and enthusiasm’ that is the spirit of John F. Kennedy.”

As a student in the College of Arts and Sciences, the list of Hodges’s accomplishments is long and includes completing four majors (government, history, American studies and the College Scholar Program), serving as a trustee and director of the Telluride Association, and receiving a Mellon Mays undergraduate fellowship and the 2021 Bernard E. West prize, which is awarded to the most promising undergraduate research scholar specializing in American history.

After graduating in December, Hodges began serving as Cornell’s inaugural Racial Justice in Public Safety Fellow, co-leading the working group’s continuing efforts to reform the university’s emergency response system. He has already helped design new dispatch procedures for the Community Response Team. In addition to his fellowship, Hodges is pursuing a Master of Public Administration at John Jay College of Criminal Justice. In the fall, he will begin a joint doctoral program in history and African American studies at Yale University.

Hodges received the JFK Award during Cornell Leadership Week at a ceremony attended by members of the Class of 1964 and Cornell leadership including Kraig Kayser MBA ’84, chair of the Board of Trustees, and David Honan, Cornell Chief of Police. The award, which was established by the class in their senior year, has been given to students from every college, many of whom have gone on to dedicate their lives to public service.