Opportunities
For Students
For Faculty and Staff
For Community
For Alumni
Courses
Our Network
About
About David M. Einhorn
Our Team
Stories and News
What is Community-Engaged Learning?
Engaged College Initiative
Calendar
Our Supporters
Make a Gift
Contact
Student grants serve communities from New York to Ethiopia
By Caitlin Hayes 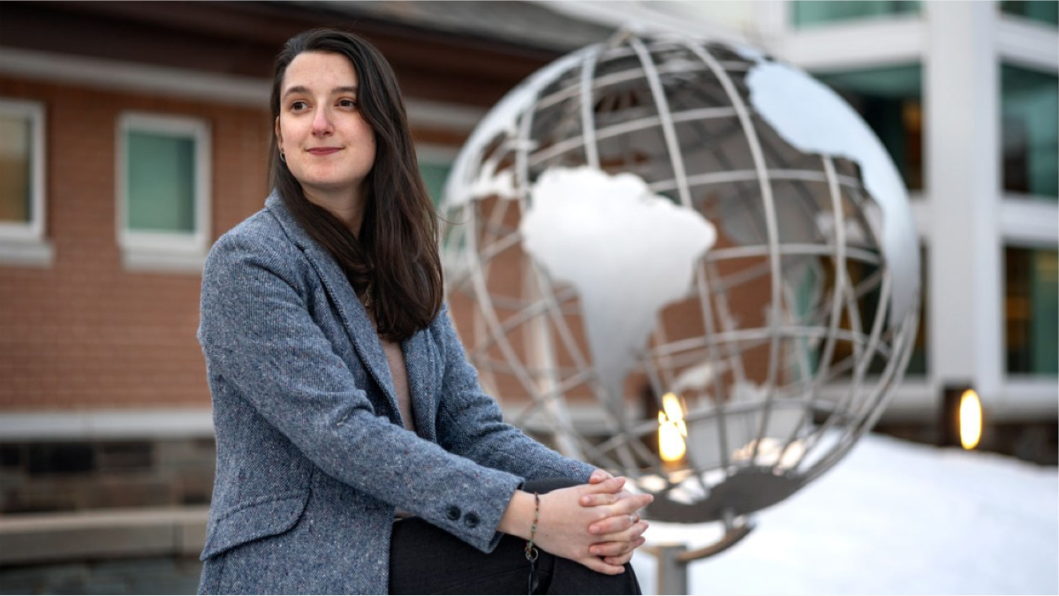 When Juliet Jordan ’22 applied for a part-time job at Moylan Safety Services LLC, an Ithaca aviation service company, there was only one problem with her application: She had never been on a plane.

“I told Mr. Moylan that I had the skills, and all he had to do was teach me the terminology,” Jordan says. “He gave me a chance.”

She got the job, as a safety analyst, rekindling a childhood fascination with aviation.

Now, Jordan is working with a community partner to take on one of aviation’s biggest challenges – high carbon emissions – thanks to a Serve in Place grant from Cornell’s David M. Einhorn Center for Community Engagement.

“The very idea of a giant metal tube flying through the sky at hundreds of miles an hour, carrying people where they need to go, makes me smile every time,” Jordan says. “But the aviation industry is a huge global contributor to carbon emissions. It doesn’t have to be, at least not in the next few decades.”

Jordan is one of 23 Cornell students who have won Serve in Place awards for the winter 2022 cycle. The awards support students participating in community-based research or community-engaged learning projects that address a specific interest, problem or public concern and include working with and learning from a community partner. Nearly 300 students have been awarded funding since the program began in 2020.

With her grant, Jordan has been researching sustainable aviation fuels made from municipal solid waste – such as clothing, paper products, packaging, and plant material – with Erik Balcome, fixed base operations manager at Taughannock Aviation in Ithaca.

These sustainable fuels could reduce carbon emissions by up to 80%. But the infrastructure is in its infancy; supply is low and costs are prohibitive.

“Wide use of sustainable aviation fuels is on the horizon, and it truly comes down to policy creation and incentives and material collection in order to help lower costs,” Jordan says.

A passion project for them both, Balcome and Jordan are focused on making sustainable aviation fuels available to Northeast markets, specifically New York state. “We want to hone in on the composition and availability of raw product as well as whether the placement of refineries for production, alongside jet fuel, is feasible,” Balcome says. “The next big step for the project is to bring the findings to existing producers and lean on their expertise to get to the next phase.”

As a master’s degree student at the Cornell Institute for Public Affairs (CIPA) in the Jeb E. Brooks School of Public Policy, Jordan is also formulating a convincing case to lawmakers about the need to incentivize development of the infrastructure. Cornell Policy Review published an overview of Jordan’s research Feb. 3.

“Juliet is driven,” Balcome says. “She’s engaged and excited by anything you put in front of her, and I’m lucky to get to work with her and be around her energy.”

As a woman making inroads in a male-dominated field, Jordan has proven that she does not shy away from a challenge.

“CIPA and the Serve in Place award encourage you to be brave and break barriers,” Jordan says. “I can go out into the community and have my focus in a STEM environment like aviation management, but I’m a public administration student at Cornell, too. It’s fantastic.”

She has accepted a position as a policy and government affairs officer for an aviation-based company in Texas – a dream job she credits in part to her grant-related work.

This article is adapted from the original by Caitlin Hayes, a writer for the Cornell Chronicle.

Four students in the ILR School have received Serve in Place grants that will impact communities in Ethiopia, the Navajo and Hopi nations, and upstate New York.

Nathan Eyasu ’25 will use the grant to fund a research library in Ethiopia. It will provide underprivileged high school and college students with a place to conduct research, do assignments, access technology and study free of distraction. The goal is to help students break familial financial insecurity through education and to help them graduate. “I wanted to create something that would be greater than me and would create a generational impact among thousands of kids beyond what I could see or fathom,” Eyasu says, who will use the grant to cover technology, travel and delivery costs.

The project is a collaboration with the Caleb Foundation – Save Life with Pennies. Starting in March 2021, Eyasu ran a technology and book drive in his community in Atlanta. He plans to use the items he collects to ship to Ethiopia for the research library, which is in a building on a plot of land owned and used by the Caleb Foundation.

Alejandra Quintero, M.I.L.R. ’23, will use the grant to support the union organizing efforts of farmworkers in upstate New York. Farmworkers are often excluded from labor protections due to their undocumented status and many states prohibit them from organizing. Quintero plans to use her grant to collaborate with the Worker Center of Central New York “to create a database for a future organizing strategy that will allow workers to be identified by one another while they begin their organizing drive,” she says.

Edgar O’Connell ’23 and Diana Nerangis ’22 used their grants to participate in the ILR School’s Hopi and Navajo Mediation Engaged Learning Program. Both hope to use Hopi and Navajo methods of mediation to become better mediators themselves.

O’Connell will write a research paper comparing and contrasting Western and Indigenous mediation practices and will explore the overlap between open individualism and the factors that enable Indigenous mediation to be successful. He also hopes to use this experience to become a better advocate for Indigenous rights.

Nerangis hopes to use what she learned about traditional meditation practices and restorative justice as a member of the ILR School’s Scheinman Conflict Resolution Club. Following her trip to the Hopi and Navajo nations, she will write a research paper examining the use of traditional mediation in domestic disputes compared to traditional Navajo peacemaking. “I wanted to compare two different types of conflict resolution and thought that the areas of familial civil disputes would be an interesting area to use to center my comparison” she says.

Amira Shimin ’25 is a student writer for ILR Communications.

It’s nearing kitten season for animal shelters across New York, which means the number of cats they take in each week is about to spike. With support from Cornell, the Saratoga County Animal Shelter (SCAS) in Ballston Spa, New York, is ready for this influx, thanks to a recent revitalization of its standard operating procedures.

“Making things more efficient or understandable for our staff, having better protocols – that helps our animals and our community,” says SCAS veterinarian Sara Sosnow, who led the project.

Bierman, who is from the Albany, New York, area and had worked in animal shelters there before, spent December 2021 and January 2022 at SCAS, assisting with patients and shadowing staff to get a sense of the optimal protocol for each situation.

“These included primers on classic diseases you see in shelters, like feline upper respiratory infections, as well as the intake process and cleaning protocols – not all medical, but still important,” Bierman says.

Bierman reviewed SCAS’ existing but dated protocols and compared them to those used by the Maddie’s® Shelter Medicine Program at the SPCA of Tompkins County and other clinics. She also reviewed two core shelter medicine textbooks, as well as “Guidelines for Standards of Care in Animal Shelters” by the Association of Shelter Veterinarians.

Bierman adapted these “gold standard” materials for practical use at SCAS. She also made sure to keep the language approachable. “The textbooks use a lot of medical language and academic protocol,” she says. “I thought about when I first worked at an animal shelter, and how some staff might be new to animal care or might be high school students new to jobs in general, so I wanted to make sure I was using protocols that anyone could understand and anyone could read.”

For two months, Bierman was reading, observing and drafting, then revising based on feedback from Sosnow and guidance from Elizabeth Berliner, D.V.M. ’03, the Janet L. Swanson Director of Shelter Medicine at the College of Veterinary Medicine.

“I’d pester Dr. Sosnow with questions,” Bierman says. “‘Is this what you really do? What if this happens, what do you do if that happens?’ A lot of it was like working on a puzzle, which I really enjoyed.”

She and Sosnow wrote approximately 15 protocols for dogs and cats.

“Having these protocols and easily accessible cheat sheets makes things so much easier,” Sosnow says. “The protocols create consistency, and consistency helps us give the animals the best quality of care possible.”

This article is adapted from the original by Melanie Greaver Cordova, assistant director of communications at the College of Veterinary Medicine.