Opportunities
For Students
For Faculty and Staff
For Community
For Alumni
Courses
Our Network
About
About David M. Einhorn
Our Team
Stories and News
What is Community-Engaged Learning?
Engaged College Initiative
Calendar
Our Supporters
Make a Gift
Contact
Students tackle climate policy in Cornell in Washington course
By Kathy Hovis 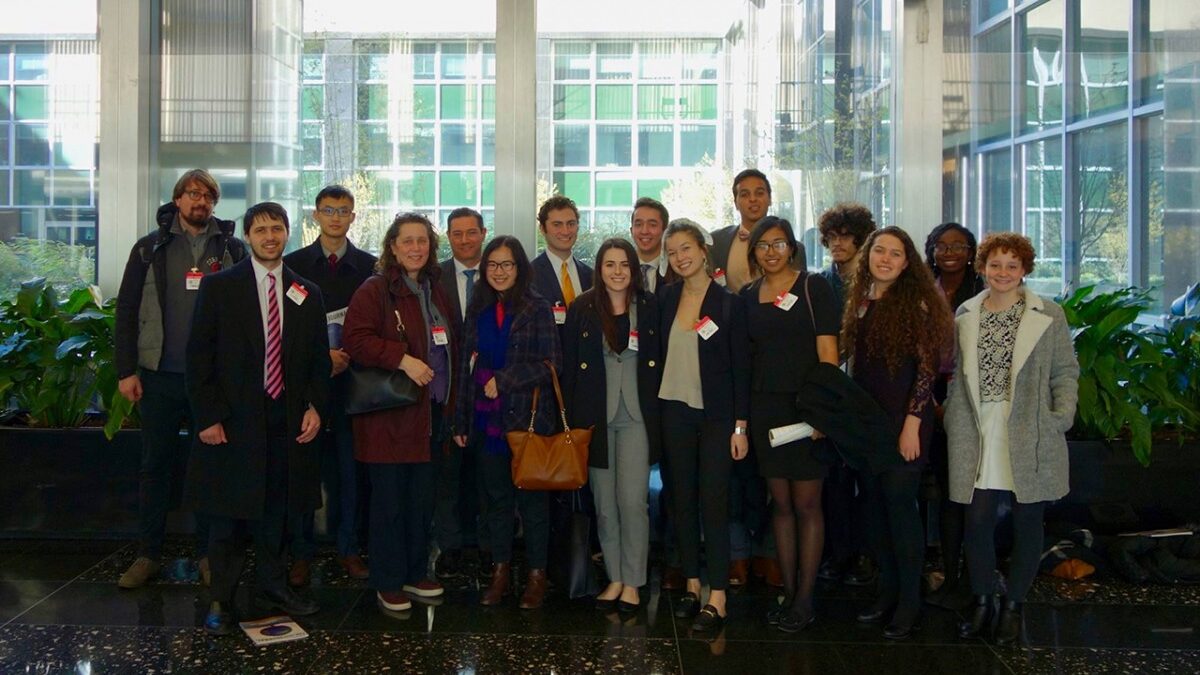 Students in the Cornell in Washington program with Christine Leuenberger, front row, second from left, a senior lecturer in the Department of Science & Technology Studies.

Students in the Cornell In Washington program had the chance to learn about how science is incorporated – or not – into the policymaking process during a March 23 visit to the U.S. Department of State in Washington, D.C.

Christine Leuenberger, a senior lecturer in the Department of Science & Technology Studies and a former science fellow at the State Department, received a grant from the Office Engagement Initiatives to take students to meet some of her former State Department contacts, to listen to briefings on climate change and other issues, and to explore opportunities for collaboration among students, faculty and policymakers.

Students were briefed by Daniel Stoian, deputy executive director of the Bureau of South and Central Asia at the State Department, who gave them policy-relevant problems to work on as part of their final projects for STS 4451 – Making Science Policy: The Real World. At the end of the semester, students will brief the bureau on the results of their research, Leuenberger said.

“In a time of extreme budget frugality, the U.S. Department of State does not have the resources to stand up an internal think tank or team of data scientists as we would like,” Stoian said in a letter supporting the project. “We simply would not have the capabilities Dr. Leuenberger and her team offer were it not for her initiative to bring students to Washington, D.C.”

Leuenberger served as an American Association for the Advancement of Science Science and Technology Policy Fellow at the State Department and at the U.S. Agency for International Development in 2016-17. Upon her return to Cornell, she designed two new courses on the undergraduate and on the graduate level – Making Science Policy: The Real World, which she is teaching in Washington, and Science and Policy-Making: The Two Cultures.

“These engaged courses enable students to better understand the structural constraints, concrete practices and relevant policy questions that policymakers deal with on a day-by-day basis,” Leuenberger said. “They also enable policymakers to network with academics and students in order to facilitate future collaborations.”

Leuenberger said through the courses she hopes students will learn how to effectively link research with policy.

“This level of engagement will hopefully increase understanding on both sides about how to most productively work across the boundaries of our academic and policy communities,” she said.

This story was published in the Cornell Chronicle.